Connie Jacoba Dekker was born in 1960 in Rotterdam in the Low Countries. She divides her time between Holland and Tuscany. Connie Dekker’s artistic journey began in the late 1980s in sculpture with work such as ‘recipients’ placed directly on the floor or on the ground. References to water are a constant in her work such as in her cycle of sculptures in lakes. One of these portrays a rock which throws out water like a sort of floating fountain. The relationship between water and sculpture is fundamental to the existence of the latter not just conceptually but also structurally. The sculpture collects the lake’s water and returns it and in turn water makes the sculpture float in a short of open space short circuit.

After her sculpture period she shifted her attention to cloth and embroidery installations. Her first work used the swan image as an icon of transit. This image was then substituted by the use of lines which faithfully retrace the designs her father made during a very difficult period in her life and now traced once again by the artist as if she were trying to follow the trajectory of her memories. The lines take shape on the cloth and later on clothes with her work returning in this period to sculptural forms which in turn developed into performances (as in the Waiting series).

She has also used videos, initially to document performances, and later began to take an interest in the poetic and narrative quality of this medium. She retraced the places in her life in images tracing a travel trajectory across memories of her land filming the Zeeland region on the island of her childhood years, custodian of her history and past. Photography like videos have been used by Dekker as a visual exemplification of her feelings as in the ‘virtual postcards’ project which she periodically sent out on the internet expressing her emotional state in evocative images (depicting Zeeland and Tuscany in particular).

Photography is important for Dekker too as the photographic series exhibited at Uscita Pistoia shows with its echoes of the virtual postcard project and its triptych of a sequence taken during a car journey to the island of Schouwen Duiveland. Dekker’s work creates a sort of fusion at the sensitive level between her feelings and the observer who shares and takes part in the artist’s emotional state, her nostalgia for her origins testified to by means of images and accompanying texts.

The garden of speech In memoria di mio padre Leend, 1999

The precious embroidery work which Connie Dekker has exhibited at Mac,n represents an important moment during which the artist remembers the last days of her father’s life: “…he was suffering from a very malicious cancer”. “In his last days he could not work in the garden and sat at the window drawing whatever he saw and thought... [his drawings of large animals, plants] a new conversational trajectory had emerged. Two years after my father’s death in 1994 I began to embroider these drawings on sheets and cushions. It is still evolving work”. 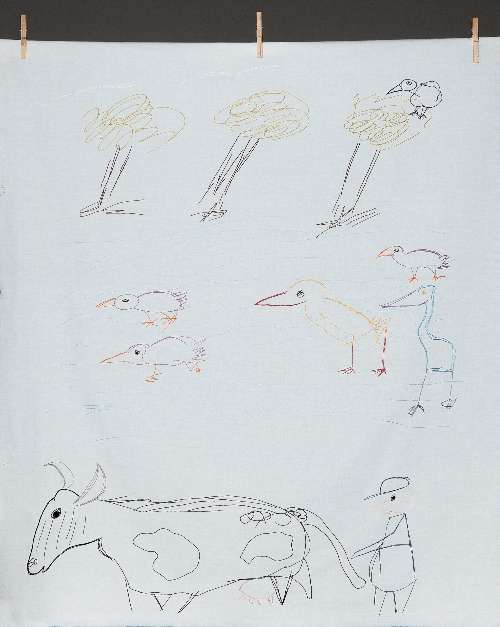 
Connie Dekker’s Zeeland, Van Ast-Gallery Production, 2004, this is how the artist described her video in the La Misura del Tempo exhibition: “The video tells of the Schouven Duiveland island in Zeeland province in the south of Holland. The artist’s family lived on this island for centuries, in a fully orthodox Protestant environment, and it is here that she has spent much of her life. The landscape of the video resembles the Venetian lagoon with a sea which leaves its mark on its inhabitants in a profound, sometimes oppressive way. The traumatic 1953 flood (this year is its 50th anniversary) powerfully modified the natural landscape and left a deep wound in its people which has never healed. Once called ‘the garden of Holland’ the disaster left an arid, desolate land. It took ten years to reclaim land which had remained underwater for a whole year in which time dams were closed and trees planted which grow quickly but have a life cycle of around 50 years. These trees are now starting to die off and the island is once more desolate. It is the landscape which dominates in the video not the inhabitants whom the artist has not yet gathered the strength to interview. The only ‘human’ presences are the three generations of the artist’s female family members: her grandmother, her mother and the artist herself, filmed in their everyday lives. The oppressive religious element does not feature: the video simply recounts a return home with the feelings which intersect and link up in it. The artist feels rooted to this land, a land she cannot fit into to although she in any case does her usual rounds, rediscovers her family and the places of her past. On the dams on which Dekker went for a stroll, to swim, watch and think we meet sheep pasturing on the grass, see ships pass, hear the ever-present church bells and the cries of the seagulls and other birds, so as not to forget. The images of Caissons in Ouwerkerk (buildings used to close the dams destroyed by the sea) represent an important point of return, the place where the artist played and a memorius morendus for the islanders who come here to remember their dead. Images of the Caissons in serene summers are interrupted by the 1953 disaster in the same place. This is the part in which the trauma of the past is felt. The video is a collage of images of the artist’s places and memories accompanied by fragments of her writings and those of a Dutch and an Italian poet. 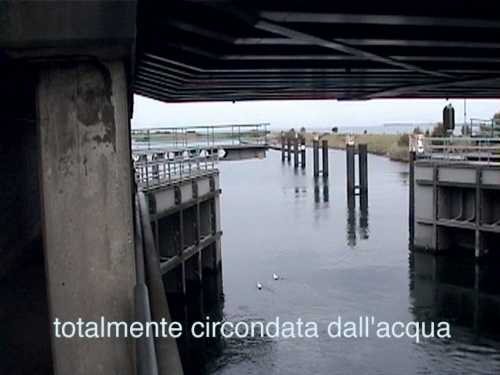 Sign up to receive free invitations for our events, updates and news